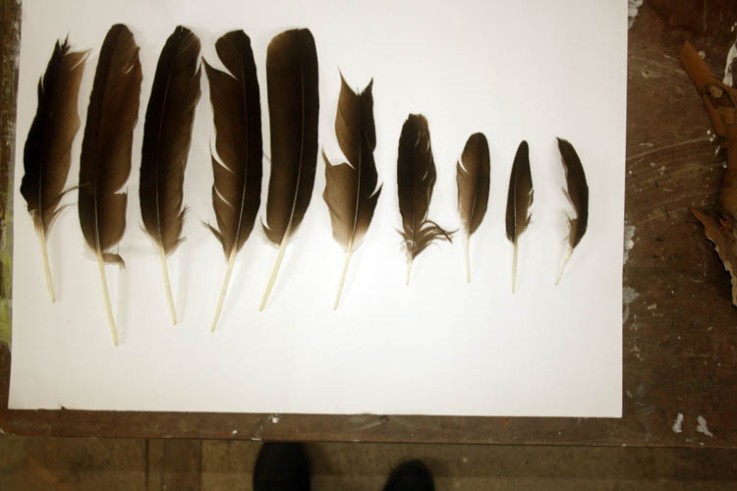 Katrina Neumann (KN): I have always been curious about Grin City Collective as it sets up a newer model for artists to engage with the community, rural landscapes, the hidden interiors of America and alternative ways of urban-based life for artists. Can you talk about your first impressions of Grin City Collective before going then upon first arriving?

Stephanie Clark (SC):  I had a fairly good idea as far as what to expect landscape wise being as I visited Iowa, and the particular region of Grinnell, Iowa, a few times before, mainly as a child and while in undergrad.  When I was living in Grand Forks, North Dakota attending the University of North Dakota my then- boyfriend-now-partner and I took an impromptu road-trip to see Vivian Girls play a free show at Grinnell College.  So, this said, I was aware of the city of Grinnell before I discovered Grin City Collective. As with a lot of Iowa there are many ochre cornfields in Grinnell and sprawling masses of farmland interrupted by homes, neighborhoods, convenience stores, thrift stores, local shops, and dive bars.  I initially thought Grin City Collective would be a space where recent graduates would go to make work and be immersed in a community of other creatives for a short time.  My initial impressions were, one, that since the majority of residents are fairly young and it is a newer residency the residency fees are much more reasonable for a recent graduate and, two, it looked like the right place for me to begin a new series of work due to its isolation.  There is something to be said for having that mutuality of experience around you while in the middle of America, knowing that everyone is kind of in the same boat age-wise with varying degrees of experience–each person harboring massively divergent individual differences.  Upon arriving I didn’t expect to be surrounded by so many writers and musicians—it was really awesome to have so many creative young people from differing backgrounds and perspectives in one place, at one time.

KN: I think a lot about how residency websites you get the gist of what it might be like to attend that residency. For example, The MacDowell Colony seems very isolated, peaceful, pampered, and quiet with little social interaction. Grin City Collective feels like it is on the opposite end of the spectrum; it feels like it is more socially engaged, edgy, transformative, and youthful. However, you never really know what a residency is like until you are dropped off into the thick of it.

I would like to hear your first-hand encounter about the environment and the residency at Grin City Collective. Is the residency more work-oriented? Is it more socially inclined towards networking and less work is produced?

SC: Grin City Collective is more socially based in its ethos and scope than other residencies I have been to, but for good reason.  When living and working in a community everything is intertwined whether immediately perceived as so or not.  In rural communities the dependence and emphasis upon community is more evident, the idea of locality is really important, and people readily rely on each other often.  This said in other communities I believe people perceive that they are relying solely on themselves, but really we are all constantly relying on each other whether we acknowledge this or otherwise.  Grin City is a younger residency and its directors Molly Rideout and Joe Lacina are also young.  I think that their vision of the residency is also what lends Grin City to having the transformative vibe and “edge” that you describe.  As far as being transformative, I also believe the age group that so far seems to frequent the residency—recent graduates—is a younger age group that lends itself to quick change and transformation out of necessity.  I really enjoyed that everyone was approaching new projects and really up for experimenting both through successes and failures and sharing results with other residents. There is an unimaginable amount of vulnerability to that process.  Additionally, there was a unifying factor to having to dig in the dirt with someone else when working for Middle Way Farm and then disperse and work on your own projects until the stars showed themselves.  There was a lot of work to be done, yes, but there were a lot of us.  The work was done steadily and with purpose, but never distracted me from my work and creative process.  I work in the studio very early in the morning, just before the sun rises, until just before the sun sets and into the evening, so, having small breaks for work allowed me mental and physical breaks from the studio—I usually get those in my own studio time at home since I have a dog—she is kind of like my alarm clock.

KN: What kind of artists would you say are generally attracted to the residency? What artists did you meet while you were there?

SC:  While at Grin City I met a range of visual artists, but I also met writers, poets, and musicians.  I think that this range of creatives was especially evident at the Rurally Good Festival.  In this particular group, and from what I gleaned, there were many recent graduates at Grin City.  Many had some connection to Grinnell, but there were some who had been referred or found Grin City online (like myself).  I had the most interaction and sustained conversation with Jacqueline Groves, Erin Close, Bill Pariso, Freesia McKee (writer), and Erin Mallea while in residence at the Collective.  A full list of artists, writers, and musicians I worked and/or resided around while in residence at Grin City can be found here: http://rurallygoodfestival.com/.

KN: What was the day-to-day lifestyle of Grin City Collective? Was there a lot of extra work to do on the farm that became distracting from working on your own projects?

SC: There was work to be done, but everything was integrated in such a way that nothing seemed intense or intrusive into my work habits and studio process. At Grin City, there are two houses for residents. The main house has a couple of commons areas and a really well equipped kitchen. Residents seemed to meet up by chance or when people would pass each other during the day or out in the pitch black darkness of the evening and come up with a plan to go do something in town that evening.  There are a few good bars a great dive bar with a bar tender with a tan corduroy blazer who played everything from 90s R & B to classic rock.  I didn’t find the work or social interactions to be a distraction from my own practice.  On the contrary, I find that I am the type of person who needs to get out and go for walks and experience the world around me in order to work extensively in the studio.  I find that the work and social aspects of the residency were unforced means to work and bond with the other artists, writers, and musicians and made me get out into the environment and experience the place at hand in the present.  I believe that is really important—to be in the present.

KN: Upon leaving from the residency, what would you say that you took with you after the experience? And, what are one or more things that you would change about the current program?

SC:  Of course, the work I made was the first take away resulting from my experience at the Grin City Collective.  The uninterrupted time with exception to working in Middle Way Farm garden space and time with others in the evenings is also an experience that I hold within me.  That time alone with ideas and thoughts and reflection upon experiences and conversations with others is so very important.  As with most of my residency experiences it was the bonds with others that I found most important following the importance of making work.  I really believe that residencies are an important place where collaboration and support can be found.  I have lasting relationships and ongoing dialogues with several of the artists who were in residence while I was at the Grin City Collective.

I am interested to see where the Grin City Collective goes.  Will it remain a residency that seems to attract recent college grads or will it change over time in that regard?  Now, having been invited to a few residencies, I notice that people’s nerves and anxieties are lessened when there is an initial group dinner the first night that everyone arrives.  I think that this really is important and while there are Friday community potlucks at Grin City, I believe something for just residents and directors would be great in getting everyone relaxed and settled in the first night of everyone’s arrival.  That initial first night kind of sets the tone. Finally, one of my fondest memories was having the opportunity to watch Butch Cassidy and the Sundance Kid on the side of a corncrib via projection one dark, clear, and starry evening.  To be out in the middle of America, sprawled on the dry grass under the night sky with others while watching a Western on the side of this old corn-crib-turned-into-writer’s-studios is something special.  Sharing these experiences with other creatives, I believe, should only generate and motivate an artist to create and make.  It was definitely inspiring to me.  I started a new body of work there and in two weeks made about 10 small paintings as a part of a series called Woolly Islands II in addition to numerous drawings and was immediately able to turn them over to the Pop-Up Gallery at the Rurally-Good Festival (a 2 day harvest, music, literature, and arts festival on the grounds) in order to generate feedback.  Working for Middle Way Farm was also really enlightening.  Having conversations with Jordan Scheibel about the land and current state of young farmers out in Iowa was vital to my experience while a resident. 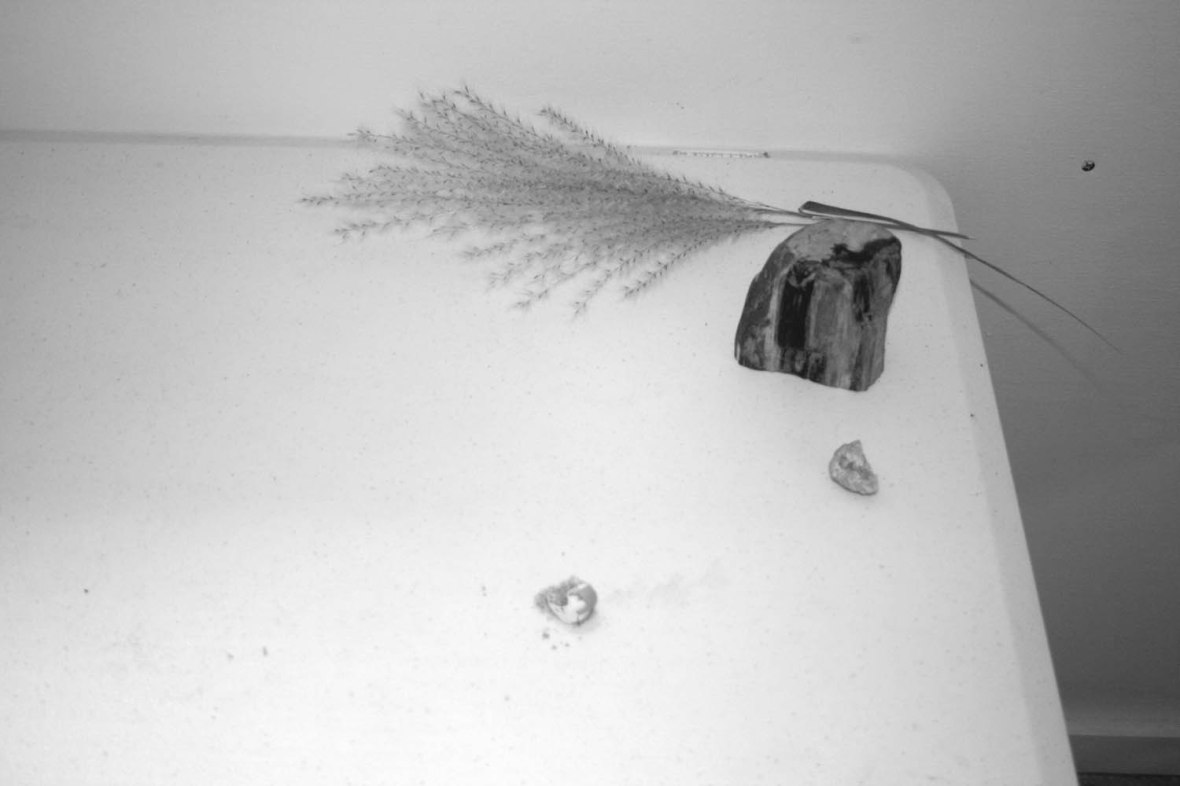 STEPHANIE CLARK was born 1988 in Alamogordo, New Mexico. Clark received her Post-Baccalaureate from School of the Museum of Fine Arts and a Bachelor of Fine Arts from The University of North Dakota. She has been awarded many artist residencies including The Homestead in Willow, Alaska; Contemporary Artists Center at Woodside in Troy, New York; Grin City Collective in Grinnell, Iowa; The Vermont Studio Center in Johnson, Vermont; The Old School in Hrísey, Iceland (forthcoming); and Gullkistan in Laugarvatn, Iceland (forthcoming). Clark’s work has been featured in the online blogs Hyperallergic and Booooooom!. Clark currently lives and works in Santa Fe, New Mexico.